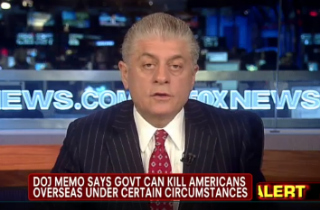 “That is nowhere justifiable under the Constitution, nowhere justifiable under federal law,” Napolitano continued. “In fact, federal law and the Constitution are to the opposite. Unless you’re actually pulling a trigger or within moments of pulling that trigger or dropping a bomb, the government has an obligation to do its best to arrest you charge you with a crime and prosecute you before they can indiscriminately killed you.”

Asked whether the administration’s argument in favor of their policy can lead to a “slippery slope” for future expansions of executive authority, Napolitano said, “This power used today against an unpopular target might be used in the future by another president against a person the president doesn’t like but as to whom there’s no moral justification for pursuing whatsoever.”

“Another concern,” he explained, “is that this 16-page white paper is written so vaguely that the logic from it could actually be extrapolated to permit the president to kill Americans here in the United States.” The outspoken libertarian added that Congress should be concerned the president is able to ramp up portions of the War on Terror without asking for the legislature’s consent.”

Asked whether it’s possible an administration could use this targeted assassination justification to strike American citizens at home, Napolitano brought up a “terrifying” memo from Homeland Security Secretary Janet Napolitano (no relation), in which — according to the Fox analyst — she declared that certain people “who are pro-life, people who believe in the right to keep and bear arms, returning veterans, people who think the government is too big and the IRS is too powerful could be characterized as ‘domestic terrorists.'”

“This is all very dangerous stuff,” he concluded. “The government gets its powers from the consent of the governed. Do you know anybody who consented to the government doing this?”