Judge Napolitano To Arianna Huffington: ‘How Can Anybody Take You Seriously?’ 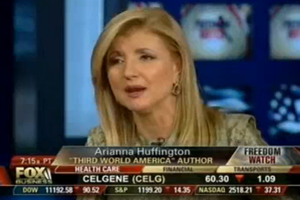 The guest list on today’s Freedom Watch, Fox Business Network’s libertarian talk show, was a roundup of the usual suspects– almost. There was Rep. Ron Paul, his son, Senator-Elect Rand Paul, former Congressman Bob Barr and liberal media mogul Arianna Huffington. Needless to say her visit was slightly more contentious than any of the others, with host Judge Andrew Napolitano repeatedly bringing up Huffington’s conservative past and asking, “how can anybody take you seriously?”

Huffington’s appearance likely marks the guest most deviant from the program’s philosophy (with Wikileaks’ Julian Assange at a close second), and definitely one of the more fiery interviews. She was on the program to promote her book, Third World America, and to debate the merits of various government-based programs. Needless to say, sticking up for a large federal government is not on Judge Napolitano’s radar, and while he agreed with her on reducing defense spending on wars abroad, domestic spending was a major point of debate. When asked whether the government should “redistribute wealth,” Huffington retorted, “Do you mean taxes? Are you against all taxation?” Judge Napolitano held strongly to his beliefs against spending, suggesting that “private enterprise should take over roads and highways” and that the “short term interests of investors [are] good for capitalism.”

Meanwhile, Huffington argued that, while she didn’t trust the government to spend on wars or bank bailouts, “I believe that we need to reach out and help those in need.” “It’s not about delegating our compassion to government,” she continued, later adding that one reason she believes in larger oversight, among many, is that “small government gave us the BP oil spill.” This allegation seemed to set Judge Napolitano off, his last question to Huffington being, “you made your name as a conservative Republican and now you want the government to do for people what they can do for themselves. How can anybody take you seriously?”

The debate from this morning’s Freedom Watch on Fox Business Network below: