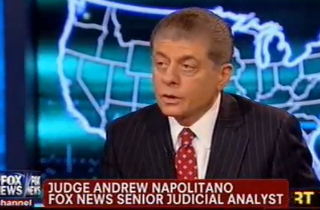 Fox News senior judicial analyst Judge Andrew Napolitano made an appearance on Megyn Kelly‘s America Live this afternoon to explain for the audience the implications of the FBI removing bags of evidence and DNA swaths from the home of Boston bombing suspect Tamerlan Tsarnaev‘s widow. He also explained that the younger Tsarnaev brother’s best option in court will be to take a plea deal and avoid the death penalty.

Reacting to the news that the FBI spent several hours searching her home and grabbing a DNA sample from the widowed Katherine Russell Tsarnaev, host Kelly asked whether a genetic match between her swab and the female prints found on the Boston bomb remnants could implicate her in the crime.

Napolitano explained: “No. It could be a clerk in the store. It could have been something she innocently handled in her kitchen before her husband took it and turned a cooking utensil into an instrument of terror.” Even if the DNA matches, he said, the statute would require intention, which the sample does not automatically prove.

As for whether her DNA being on actual explosive materials could be damning for her, Napolitano said it would provide “probable cause for them to arrest her at that point.” But cautioned again that the DNA can also be from an “innocent” portion of the pressure cooker’s timeline — i.e., at a point which she used the item to cook a “pot roast.”

Napolitano also suggested that the FBI’s uninterrupted search of the widow’s home suggests that she sense her “bad” reputation in the press and so her family seeks to “make themselves look a little better.” He cautioned that we do not know whether the search was totally voluntary or based on a search warrant.

As for the much-criticized decision to allow Judy Clarke, the high-profile defender of the Unabomber, to represent Dzhokhar Tsarnaev in court, Napolitano said her speciality is in negotiating pleas to avoid the death penalty with a guilty plea deal, thereby allowing law enforcement officials to extract as much information from the defendant without a death sentence.

In the event of a guilty plea deal, Napolitano noted, “that would mean no trial and a lot of evidence we’ll never know about because the evidence of Dzhokhar will be in private. We’ll only know what the FBI wants us to know.”

“She can hope for no jury trial but a guilty plea where he spills his guts for weeks and months until the FBI is satisfied he’s been honest and they’ve learned everything they want from him in return for which there will be no death penalty,” the judge said.

“The plea deal is their only hope,” he concluded.