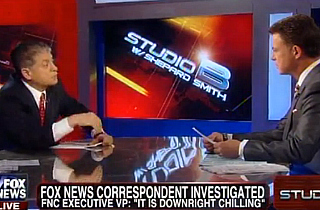 Appearing on Studio B this afternoon, Fox News senior judicial analyst Judge Andrew Napolitano took on the news of his colleague James Rosen having his personal emails obtained by the federal government as part of an investigation into whether he received secret information from an official source on North Korea.

“There is simply no crime” in what Rosen was allegedly doing when the Justice Department decided to investigate him, Napolitano told Shepard Smith. “And for the FBI to tell a federal judge that James committed a crime by receiving classified information and offering to publish it — even by asking for classified information — is absolutely wrong, and brings the justice department into an entirely new area of invasion of First Amendment privileges.”

After reading the date of the insvestigative documents from 2010, Napolitano added, “The federal government has an obligation to report to James. It’s been going on for years with no notification given.”