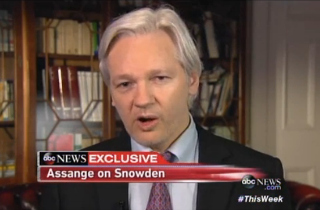 “There’s little I can productively say about what is happening,” Assange told host George Stephanopoulos when pressed for details on Snowden’s current whereabouts. “Why is it that Mr. Snowden is not in the United States? He should feel that he should be afforded justice in the United States,” Assange lamented, “but his situation is very similar to a situation that I face and that my staff face where we have been sucked into a grand jury Alexandria, Virginia.

Assange explained that the particular district in northern Virginia typically has jury pools made up of CIA and Pentagon workers, and is known as “rocket docket” for its “lack of scrutiny procedures” and high conviction rates.

“I think there are several countries where it is politically possible for Mr. Snowden to receive asylum,” Assange later added. “He has acted in a manner to draw attention to a very serious problem in the United States where, without the will of Congress, without the will of the American population, we now have a state within a state, we have the transnational surveillance apparatus,” he said. “No one signed up for this. Obama doesn’t have a mandate. They have been taken for a ride.”

Stephanopoulos noted that Secretary of State John Kerry has asserted that the Snowden leaks have put American lives at risk, prompting Assange to dismiss the rhetoric as “false” and pointing to his own WikiLeaks scandal, which he said has yet to prove harmful to any government officials or citizens.

Assange went on to rebuke Vice President Joe Biden for personally calling the president of Ecuador to pressure him into balking at asylum for Snowden. The U.S. government also revoked Snowden’s passport, which Assange called a “disgraceful” action.

“By cancelling his passport, [the U.S.] has left [Snowden] for the moment marooned in Russia,” he said. “I think that every citizen has the right to their citizenship, to take someone’s principle form of citizenship their passport, is a disgrace.”

“He is a hero,” Assange said of Snowden. “He has told the people of the world and the United States that there is mass unlawful interception of their communications.”

Watch a portion of the interview below, via ABC: