Juror B29 To Robin Roberts: ‘I Stand By Decision Because Of The Law,’ But In ‘My Heart’ Zimmerman’s ‘Guilty’ 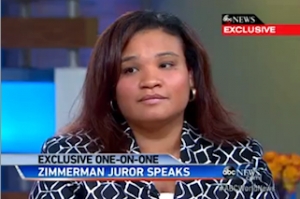 Thursday evening, ABC World News aired the first footage from Robin Roberts’ bombshell interview with Juror B29, the only minority on the six-person, all-female jury that acquitted George Zimmerman. The juror, who agreed to show her face and be identified by the first name “Maddy,” told Roberts that she believes the defendant “got away with murder” and regretted that the evidence according to the law was not there to convict him.

Maddy told Roberts that at the beginning of deliberations she intended to vote guilty for second-degree murder. Speaking for at least some other members of the jury, she said, “a lot of us wanted to find something bad, something that we could connect to the law. For myself, he’s guilty because the evidence shows he’s guilty.”

When Roberts asked what she believes Zimmerman was guilty of, Maddy responded, “killing Trayvon Martin.” But, she said, “as the law was read to me, if you have no proof that he killed him intentionally, you can’t say he’s guilty.”

“I stand by the decision because of the law,” she said. “If I stand by the decision because of my heart, he would have been guilty.” With some prompting by Roberts, Maddy repeated, “George Zimmerman got away with murder. But you can’t get away from God. And at the end of the day, he’s going to have a lot of questions and answers he has to deal with.”

Following the interview clip, Mediaite founder and Nightline anchor Dan Abrams joined anchor David Muir to discuss the revelations. “This is exactly what the defense feared, was the possibility that some of these jurors might decide the case based on emotion, and not based on the law,” Abrams said. “If she followed her heart, she would have hung that jury.”