Obama Wants To Make Clear: Gulf Oil Spill Is Not His Katrina 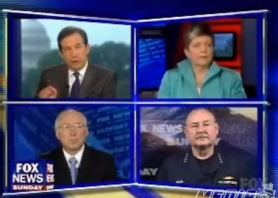 Just how badly does the Obama administration want you to not compare the current catastrophe in the Gulf to Hurricane Katrina? Pretty badly it would seem. Homeland Security Secretary Janet Napolitano and Interior Secretary Ken Salazar did a Full Ginsberg (and then some) on the morning shows Sunday and relentlessly employed the term “day one” (16 times relentless, according to Politco).

This was followed by President Obama on site press conference, which was basically a lesson on how to fit as many action words as possible into a six minute speech. And it may have worked. Especially now that the news is just getting worse and the blame seems to have rather firmly settled on BP. So now the question may be what comparison will the cablers grasp on to next? 3 Mile Island?

Alas, it was less the obvious determination of every Obama administration official to make absolutely sure those Katrina comparisons did not take hold than the worst case scenario answers that were so striking.

On Fox News Sunday (video below) Chris Wallace asked whether “If this goes on for 60, 90 days, we’re talking about a situation worse than Exxon Valdez?” Said Salazar: “That’s absolutely the case.” Oh great. Also, they would like you to know this is not Katrina.

The news gets worse this morning. This from David Kotok of Cumberland Advisors:

This spew stoppage takes longer to reach a full closure; the subsequent cleanup may take a decade. The Gulf becomes a damaged sea for a generation. The oil slick leaks beyond the western Florida coast, enters the Gulfstream and reaches the eastern coast of the United States and beyond. Use your imagination for the rest of the damage. Monetary cost is now measured in the many hundreds of billions of dollars.