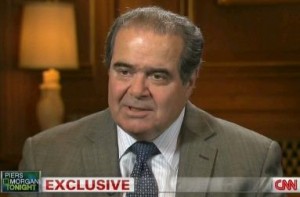 Supreme Court justice Antonin Scalia sat down for a rare interview with Piers Morgan. Scalia was joined by Bryan Garner, who co-wrote a book with the justice called Reading Law, and the justice opened up about his interpretation of the law through the Constitution and his legal positions on key issues like the death penalty, torture, burning the American flag, and even his position on money in politics decided in the Citizens United case.

RELATED: E.J. Dionne Would Like Justice Scalia To Resign For Having Too Many Opinions

Scalia explained said that the law of the United States should be “reasonably interpreted” from the text of the Constitution, acknowledging that while the law does have to take into account the changes in government and society since the time of the Founders, “their meaning then is the same as their meaning now.” On the issue of the death penalty, Scalia said he is not necessarily in favor of it, but just that it shouldn’t be left up to “democratic choice.”

Morgan brought up another interview Scalia did a few years ago with 60 Minutes where the justice said torture does not constitute cruel and unusual punishment, and challenged the justice on his position. Scalia explained that the Constitution never addresses torture, just punishments, and while he is personally not for waterboarding, the Constitution does not have anything to say about it.

In the next segment, Morgan asked why Scalia believes that people have a right to burn the American flag, even though he would personally “send them all to jail” if it were up to him. Scalia joked that he would gladly do it if he were the king, but gave a strong defense of burning the flag from a constitutional standpoint.

“We have a First Amendment, which says that the right of free speech shall not be abridged, and it is addressed in particular to speech critical of the government. I mean, that was the main kind of speech that tyrants would seek to suppress. Burning the flag is a form of expression. Speech doesn’t just mean written words or oral words. It could be semaphore, burning a flag is a symbol that expresses an idea. ‘I hate the government, the government is unjust, whatever.'”

Morgan then brought up the Citizens United ruling and told Scalia that the critical view of Scalia’s position is that there would be no limitation to how much Super PACs could raise for candidates, and questioned how the Founders, especially Thomas Jefferson, would view it. Scalia answered, “Jefferson would have said, ‘The more speech, the better.'” He argued that one simply cannot separate speech from the money that “facilitates” it.

He admitted that while he does not always like the result of a case that he has ruled with the majority on, but made it clear that it is his job to uphold the Constitution, and not to “make [it] come out right all the time.”

Later on in the interview, Morgan asked Scalia to open up about his relationship with the other justices on the court, specifically Chief Justice John Roberts, given the very public split he made with the rest of the justices on the Affordable Care Act decision. Scalia completely denied he ever had a falling-out with Roberts over the decision.

Morgan asked Scalia to respond to critics who say he is “overly political” in his decisions. Garner defended Scalia as a man of conviction who decides cases independently of what he personally believes. Scalia said that he doesn’t think a single one of his colleagues are politically motivated in how they decide their cases, insisting “the court is not a political institution” but acknowledged that justices appointed by Democratic or Republican presidents will have similar judicial outlooks.

And a later segment from the interview here: