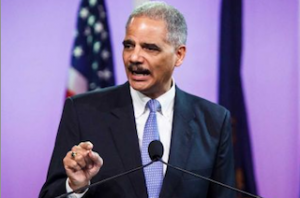 Attorney General Eric Holder made remarks about George Zimmerman‘s acquittal during a speech to the predominantly African-American Delta Sigma Theta sorority at Howard University in Washington Monday. Following the verdict the Justice Department announced it would be investigating possible civil rights violations in connection with the case.

Holder assured those in attendance that the DOJ shares their “concern” about the outcome of the trial and vowed not to “let this opportunity pass” for “our nation to speak honestly about the complicated and emotionally-charged issues that this case has raised.” He urged the community to “approach this necessarily difficult dialogue with the same dignity that those who have lost the most, Trayvon’s parents, have demonstrated throughout the last year – and especially over the past few days.”

Read Holder’s full prepared remarks on the Zimmerman case below, via GretaWire:

“Of course, as this celebration unfolds, we are also mindful of the pain felt by our nation surrounding the tragic, unnecessary shooting death of Trayvon Martin in Sanford, Florida last year – and the state trial that reached its conclusion over the weekend. As parents, as engaged citizens, and as leaders who stand vigilant against violence in communities across the country, the Deltas are deeply, and rightly, concerned about this case. The Justice Department shares your concern – I share your concern – and, as we first acknowledged last spring, we have opened an investigation into the matter.

Independent of the legal determination that will be made, I believe that this tragedy provides yet another opportunity for our nation to speak honestly about the complicated and emotionally-charged issues that this case has raised. We must not – as we have too often in the past – let this opportunity pass. I hope that we will approach this necessarily difficult dialogue with the same dignity that those who have lost the most, Trayvon’s parents, have demonstrated throughout the last year – and especially over the past few days. They suffered a pain that no parent should have to endure – and one that I, as a father, cannot begin to conceive. Even as we embrace their example and hold them in our prayers, we must not forego this opportunity to better understand one another and to make better this nation we cherish.

Moreover, I want to assure you that the Department will continue to act in a manner that is consistent with the facts and the law. We are committed to standing with the people of Sanford, with the individuals and families affected by this incident, and with our state and local partners in order to alleviate tensions, address community concerns, and promote healing. We are determined to meet division and confusion with understanding and compassion – and also with truth. We are resolved, as you are, to combat violence involving or directed at young people, to prevent future tragedies and to deal with the underlying attitudes, mistaken beliefs and stereotypes that serve as the basis for these too common incidents. And we will never stop working to ensure that – in every case, in every circumstance, and in every community – justice must be done.”

Watch the remarks below, via CNN: