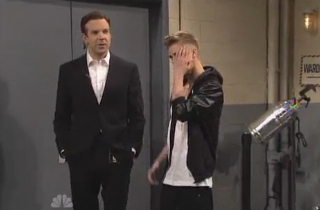 One of the highlights of this weekend’s (underwhelming, as usual) Saturday Night Live was a sketch that poked fun at host Justin Bieber‘s pre-pubescent voice, sexually androgynous looks, and easily-parroted dance moves. Many viewers remarked on how Bieber himself partook in the self-mockery, feigning disbelief and disgust at his agent — played by Jason Sudeikis — for suggesting these 12 clearly-not-Bieber body doubles could ever suffice.

The part of the sketch that everyone seemed to miss, however, was when Bieber narrowly avoided dropping the word “retarded,” effectively avoiding what would have likely been another national conversation about how a psychological term for the mentally-disabled has become pejorative slang for anything lame or undesirable.

Several minutes into the sketch, Sudeikis summoned several of the “body doubles” to show off their Bieber dance moves. Bill Hader did that goofy hand-heart thing. Fred Armisen did the Bieber winks. And Aidy Bryant did the Bieber crotch grab.

Unimpressed with the dancers, Bieber remarked, “Those moves look retar –” before cutting himself off and covering his face. “Ugh, those moves look stupid,” he quickly rebounded.

“What? So you’re admitting it?” Sudeikis quipped, and the skit carried on without a hitch.

Given how many teenagers regularly use “gay” or “retarded” as a generic insult for all things uncool, it wouldn’t have been terribly surprising if Bieber let it slip. But he should probably feel lucky: misuse of the word has come under intense scrutiny in recent years, especially after major figures like Rahm Emanuel, Rush Limbaugh, and Ann Coulter have all come under fire for using the word to insult political foes.

Regardless of how you feel about the word — some see it as offensive and disrespectful; others believe the P.C. police have gone too far with this one — it’s hard to deny Bieber would’ve taken serious flak had he dropped the bomb.