Juvenile Weatherman Jabs Female Coworker: ‘Probably the Most Action You’ve Had in Months’ 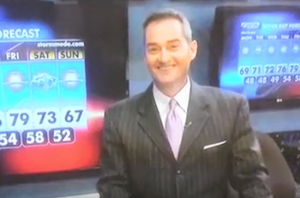 This clip confirms my long-running suspicion that everything really is worse in the state of Wisconsin, including workplace harassment.

Somehow, meteorologist Charlie Shortino out of Madison, Wisconsin managed to keep his job after this humdinger live on-air for NBC-15 that seems to have slipped under the radar until now.

At the conclusion of the network’s “Pet of the Week” segment, a female anchor jokingly and harmlessly remarked “OK Charlie, I’m gonna sit here and hang out with my new best friend!” referencing the rescue animal that was on the show to be put up for adoption. She then tossed the segment to Shortino in the weather department while playing with the pup.

The smarmy weatherman, a graduate of UW-Madison, according to his own bio, remarked, “Really? I think you two should get a, uh, get a hotel room or something. That’s a lot of action going on over there. Probably the most action you’ve had in months, huh?”

If you thought the entire female staff at NBC-15 immediately burst into good-natured laughing, taking in stride the ingratiating sexual comment, you’d be wrong. Just painfully awkward and pervading silence.

While wondering if his on-camera achievements were going to earn him an Alum of the Year Award from the University of Wisconsin-Madison, the comedian Shortino jovially continued, “Oh well, I crack myself up if I don’t crack anyone else up!”. No shit Charlie, we can see that.

NBC-15 Madison did not immediately return Mediaite’s request for comment. Watch the above clip and fight the urge to punch your computer screen at the smug look of satisfaction on Shortino’s face.