Kaine Questions If Hacked Clinton Emails Are Real, Tapper Points Out ‘You Could Ask Her’ 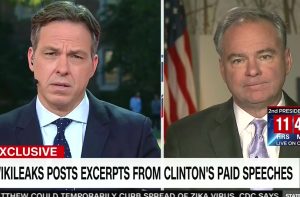 Tapper asked on State of the Union about one email, which seemed to show that Clinton told a group of bankers in a paid speech that her “dream” was for “open borders and open markets.” But Kaine said that it wasn’t clear whether of not the email was real.

“I don’t think we can dignify documents dumped by Wikileaks and just assume that they’re all accurate and true. Anybody who hacks in to get documents is completely capable of manipulating them,” he noted.

“Are you disputing the accuracy of this? Did Hillary Clinton not say to these Brazilian bankers that she has this dream?” Tapper asked.

“Jake, I have no way of knowing the accuracy of documents dumped by this hacking organization,” said Kaine.

Tapper tried again. “Is this document then, is it accurate? Did she tell Brazilian bankers that her dream –”

“Well, you could ask her,” Tapper pointed out.