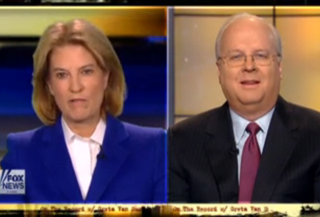 Reality TV and real estate personality Donald Trump may be as far as nine points ahead in the latest GOP 2012 polls, but that doesn’t mean the Republican establishment is ready to embrace him with open arms. On last night’s On the Record, Karl Rove did his best to distance the party from the Donald, telling Greta Van Susteren that his “weird conspiracy theories” about President Obama’s birth certificate made him a “joke candidate.”

After a lengthy discussion about the current budget battle in Congress in which Rove claimed Republicans had attained victory, if only because the federal government’s budget authority had been reduced by $60 billion, Van Susteren questioned Rove on Trump’s impact on the Republican Party. Rove refused to answer whether Trump “hurt” the Party, noting instead that his obsession with President Obama’s birth certificate “hurts Donald Trump.” “He was an interested candidate who had a business background and could have contributed to dialogue,” Rove lamented, adding that making the birth certificate a centerpiece of his campaign delegitimized him. “He’s off there in the nutty right, and is not an inconsequential candidate,” Rove concluded, adding that “the guy is smarter than this” and he was “sorry to see it happen.” He also denounced claims that President Obama didn’t go to school, citing a friend who was a classmate of the President’s, and the conspiracy theory about the newspaper reports in Hawaii.

While Rove isn’t alone in thinking that Trump making someone else’s birth certificate and not, say, actual political issues the crux of his campaign will likely not end well for his career, Rove and the Republican establishment have an added reason to keep Trump at bay: if he does, indeed, land the nomination, Trump has made enough connections and kept enough of his money over decades to depend significantly less on the party structure to fund his campaign. In other words, a President Trump would owe significantly fewer favors to Republican fundraisers than other candidates of less luxurious backgrounds. And that‘s the sort of thing– not the birther issue– that has made him so popular among small government Tea Partiers.