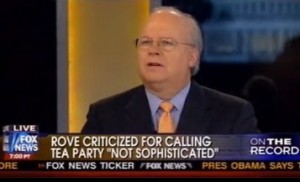 Last week Karl Rove told German magazine Der Spiegel “If you look underneath the surface of the Tea Party movement, you will find that it is not sophisticated.” This created a bit of an uproar, or at least further evidence that there is something of a civil war between the GOP establishment (in the person of Rove) and the Tea Party movement. Well, last night Mr. Rove walked back those comments to Greta Van Susteren, claiming that he meant a different definition of “sophisticated.” Semantics, the last vestige of a scoundrel.

Karl Rove is all over the place. Some days he’s in the establishment, and some days he’s not. And now he’s in… Europe? Well, sort of — Rove treated German magazine Der Spiegel to a pretty candid interview concerning the American political climate. “If you look underneath the surface of the Tea Party movement,” he told the newsweekly, “You will find that it is not sophisticated.” Ouch. He then boldly asserted, “It’s not like these people have read the economist Friedrich August von Hayek.” That’s certainly one way of saying, “I have read the economist Friedrich August von Hayek.”

Last night, Rove sang a different tune, telling Van Susteren that “in the dictionary, one definition is pretentiously or superficially wise,” adding “Tea Party members are not saying they are skilled in ways they are not…they are not comfortable in a cocktail party in Georgetown or Lobbyist meeting on K Street.” Rove continued, “this wasn’t formed by elitist think tanks,” continuing “this was a spontaneous uprising that began in February of 2009.”

Good points, but it definitely seems like he’s using parsing his own words, in almost a “Clinton-esque” fashion, doesn’t it?

The bottom line is that Rove is right to say that the Tea Party started as a grass-roots movement outside the beltway. But what he neglects to add is that, since the movement started roughly 18 months ago, many have seen its mission co-opted by the very inside-the-beltway think tanks and lobbying groups that the Tea Party has railed against. Case in point; Freedom Works is one of the leading organizations behind the movement, and is headed up by former House Majority Leader Dick Armey – the most insider of insiders.

So yes, the Tea Party did start as an unsophisticated and organic uprising of everyday Americans. But since then its ironically been used by many of the very insiders to keep their own status quo, perhaps at the expense of the Tea Party movement itself.