Karl Rove: GOP in Better Position than This Point in 2010 Midterm Cycle
video

Karl Rove: GOP in Better Position than This Point in 2010 Midterm Cycle 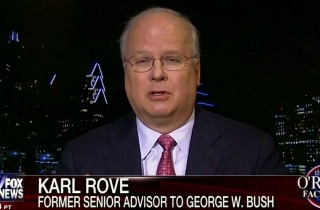 Former GOP strategist and Fox News Channel contributor Karl Rove joined Fox News Channel host Bill O’Reilly on Wednesday evening where he said that the implementation of the Affordable Care Act has had a beneficial effect on the Republican Party’s chances of making gains in the 2014 midterms. Looking at recent polling data, Rove claimed that the GOP is in a better position at this point in the election cycle than they were in 2010.

RELATED: Christopher: CNN Reports on the ‘Silver Lining’ for Obamacare in Latest Poll

“At this point, one year out from the election, the Republicans were down 5,” Rove observed. “Today, they are up one in the average.”

He said that, given that the Democrats are defending Senate seats in seven states that Mitt Romney won in 2012, Republican prospects for retaking the Congress look possible if not probable.

Rove said that this reversal of political fortunes from the government shutdown is entirely due to the Affordable Care Act’s implementation and it’s only going to get worse. However, even if the ACA were unfolding well and it was a popular program, Democrats would still have obstacles to overcome ahead of the 2014 midterms.

“The economy is not particularly good,” Rove said. “The president’s ratings are low. All of these things combined to point towards a lower number for the Democrats and a higher number for the Republicans next year.”