Karl Rove Has Had It With The Donald Trump Debate: ‘This Is Not A Newsman’
video

Karl Rove Has Had It With The Donald Trump Debate: ‘This Is Not A Newsman’ 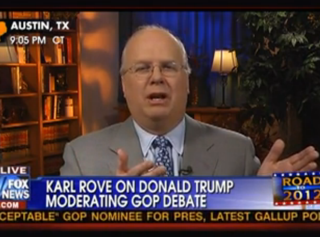 The evolution of Karl Rove‘s feelings on the prospect of Donald Trump moderating a Republican debate while contemplating running for president himself has been a marvel to watch. On Saturday morning, he was confused that anyone would take it seriously. This morning, he was insulted. Tonight on On the Record, Rove’s patience was clearly depleted, as he told host Greta Van Susteren it will “have the smallest viewership of any debate this year.”

RELATED: Karl Rove Is Completely Baffled By The Trump Debate: ‘This Is Weird, Isn’t It?’

Rove didn’t hide his feelings about the debate from the beginning of the segment, explaining that in Trump, “We’ve got a guy who is not only saying ‘I’m going to make a decision on who I’m going to endorse shortly after this debate and I’m already leaning someway, and I may run myself’ and we expect him to be the impartial moderator? Could you imagine what would happen if MSNBC hosted a debate and the moderator said ‘I’m going to endorse…’ Nobody would show up!”

Van Susteren argued that a similar situation arose when PBS’s Gwen Ifill moderated a general election debate in 2008 despite having written a book on then-Senator Barack Obama, a situation in which, Rove countered, “all heck broke loose.” There was also the matter that Trump had controversial positions and didn’t have any experience in journalism. “Is Mr. Trump going to ask the candidate whether they agree with him that Barack Obama was not born in the United States… that George W. Bush is ‘evil’?”

Rove went on to argue that Trump was “not a newsman” and that “he could do a lot of damage to somebody.” “I think it’s just odd,” he continued, then suggesting that “everybody’s going to bust up their holidays” to go to the debate and it would still have “the smallest viewership of any one of the debates this year.”