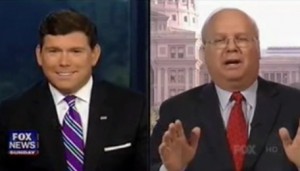 Former White House Deputy Press Secretary Bill Burton appeared on Fox News Sunday this morning to debate Karl Rove on job creation, but Rove didn’t stop at attacking Burton and President Obama. The former Bush Chief of Staff also lashed out at host Bret Baier for exposing the rigidity of the GOP presidential field by asking them if they would walk away from a deal with $10 in spending cuts for every $1 of tax revenue, telling Baier, “With all due respect, that was a lousy question for a debate.”

Burton set the table by telling Baier that it was Republicans in Congress who are responsible for blocking job creation. Baier read Burton’s remarks from a year ago, which depicted an improving economy, and asked Burton what had changed since last year’s trip to Martha’s Vineyard, citing the President’s low poll numbers on his handling of the economy.

Burton responded “The difference is the republicans won the House,”since that time they have done nothing to produce jobs, and put nothing forward to partner with the president to create jobs and move this economy in the right direction.”

Baier, citing his 10 to 1 debate question, asked Rove if Democrats might have a point about ideological rigidity. Rove started out by knocking the question as one “that had a predictable answer to it,” and accused Baier of not offering them a chance “to give a nuanced answer.”

Baier pushed back, saying, “Wait a minute, hold on, we gave them the opportunity, Karl…”

“With all due respect, Bret,” Rove began, respectfully, “it was a lousy question for a debate. If you wanted to get a better answer, ask that question of the candidates individually.”

Rove’s comment drew an incredulous smile from Baier, and chuckles from an off-camera Burton, who interjected, “These guys are running for President of the United States, and they can’t talk to Bret Baier about what their vision is for how to deal with the economy?”

Rove then explained that the GOP was rubber, while President Obama was glue, because the President, in 2009, had responded to another set of unreasonable Republican demands by reminding Rep. Eric Cantor (R-VA) “I won” during negotiations over a stimulus package that contained 40% tax cuts.

Burton then lit into Rove over his role in the current economic conditions, saying, “I appreciate that you have an opinion on this, Karl, but as someone who was a leader in a White House that turned a record surplus into a deficit, that got us involved in a war we never should’ve been in, and turned the floor of the New York Stock Exchange into a casino, I don’t think the American people are quite ready to hear a lecture from you on good governance.”

Baier tried to rein in the discussion a bit, asking Burton what the President has done to create jobs, and Burton responded by ticking off things, like the payroll tax, the infrastructure bank, and trade deals, that could be done if Congress would act. Baier pointed out that the White House recently said it had not yet sent over the trade deals to Congress.

Burton then accused Republican leaders of wanting “the economy to do poorly so that they can score political points,” to which Rove responded, “With all due respect, Bill, do not question the motivations and the integrity of the people on the other side.”

Burton pointed out that statements from leaders like Mitch McConnell didn’t leave many questions about their motivation.

Rove did make a good point that some Democrats are opposed to the infrastructure bank, a symptom of the lack of unanimity that allows a lockstep minority to get so much done.