Rove Responds To Trump: Not A Serious Candidate (But ‘Let Him Get His Attention’) 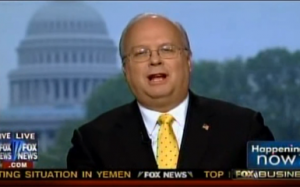 It must be tough for Donald Trump to keep track of the many comments he is receiving from all over the political spectrum about his potential candidacy for President. Karl Rove is one persistent critic who Trump already responded to once, but now Rove is striking back again and sharing some advice he provided to Trump’s people that apparently wasn’t followed.

Rove took exception to Trump claiming that President Bush (and by association, Rove) were responsible for President Obama being elected. Rove said “I think Obama gave us Obama” and then commented on Trump’s strange campaign strategy:

“If he wants to run down George Bush and ask for the Republican nomination, I don’t think that’s a winning strategy. And if he wants to base his entire campaign upon whether or not Barack Obama was really born in the United States, that’s his privilege. I just think it’s a losing strategy and I think it’s beneath him.”

Rove also disputed that Trump’s approach is working, instead suggesting the poll results showing that Trump is leading the Republican field should not be trusted. Rove declared, “let him get his attention on the Apprentice, but I just don’t think he’s doing the things necessary to be taken seriously by the American people.” Instead Rove advised someone close to Trump that when journalists ask about the birth certificate issue, Trump should quickly move on and discuss other topics. However, it seems Trump still can’t resist, as just this morning he suggested he would make public his tax returns when Obama does the same with his birth certificate.