Rove Tears Into Huffington And Plouffe Over IRS Scandal: ‘Why Were Only Conservative Groups Targeted?’ 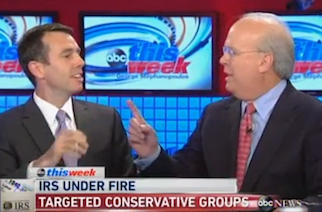 Ariana Huffington attempted to skewer 501(c)(4)s on This Week With George Stephanopoulos, when she awakened the wrath of Karl Rove.

Huffington was characterizing the conservative PACs as too political to qualify for their tax exempt status, the exact quality for which the IRS was scrutinizing them, and reached for Rove’s Crossroads GPS as an example. “I’m sure if we looked at Crossroads GPS,” she said, “it’s all about politics—”

“Please,” Rove said. “[Crossroads’] leadership knew right from the get-go that they were going to be looked at, closely. So the laws and rules that the IRS has promulgated for decades were followed very closely by GPS for exactly that. They knew there was going to be extra scrutiny.”

“I think it’s the same problem with the left,” Huffington said.

“You know what?” Rove said. “You’re the first person I’ve heard on the left say that. These groups, 501(c)(4) groups, have been active for years on the Democratic side, on the liberal side, and there has been no criticism. There was no criticism from the left in 2000 when the NAACP voter fund spent $10 million to run an ad accusing George Bush of being a bigot. No concern on the left when Americans United for Change ran television ads targeting Republican senators up for reelection in 2007, 2008 over the Iraq surge!”

“Back in the prior administration,” countered former White House advisor David Plouffe, “the NAACP was investigated, after Republican members of Congress asked for it.”

“The Inspector General looked at this,” Plouffe continued, “and said there was no politics involved in this. No one has indicated, at all, that the White House was involved. The IRS Director, was appointed under President Bush, served under both presidents, testified. This was not a political pursuit.”

“Baloney,” Rove said. “If it was not political, why were only conservative groups targeted?”

“You’re taking a broad license here, Karl. This was not an effort driven by the White House. It would be the dumbest political effort of all time.”

“I didn’t suggest it was being driven by the White House—” Rove said.

“So you think some people sitting in Cincinnati office decided—”

“No, I think people sitting in Cincinnati, Laguna Niguel, Baltimore, and Washington, D.C. listen to people like Senator Max Baucus, Senator Chuck Schumer, President Obama,” Rove said. “When President Obama goes out in 2010 and calls these groups ‘a threat to democracy,’ he’s blowing the dog whistle.”