Karl Rove To GOP: Focus On Real Issues, Not Birthers 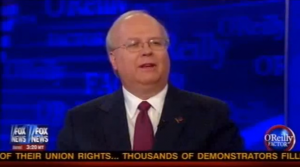 Karl Rove, a Fox News contributor and George W. Bush‘s former Senior Adviser and Deputy Chief of Staff, spoke to Fox News’ Bill O’Reilly about issues facing the Republican Party, including which “non issues” the party should ignore or, at least, refuse to encourage further. Rove specifically said that the “birther” movement – fueled by a group who believe President Barack Obama may have not been born in the U.S. and who have been calling on the President to prove his eligibility – and 9/11 deniers should not be allowed to “get too high a profile and say too much without setting the record straight,” comparing these to the John Birch Society – a far-right movement established in the last 1950s.

O’Reilly and Rove also noted that focusing on birthers and their concerns works to divide the Republican Party (both by liberals and by those within the party itself), noting the boos and jeers of “war criminal” that former vice president Dick Cheney received from a contingent of Ron Paul supporters while speaking at CPAC

Rove’s comments come on the heels of a poll (“a lousy poll,” according to Rove) showing that 51 percent of those likely to vote in the Republican primaries are unsure about whether the President was actually born in the U.S. Similarly, a poll conducted by The New York Times / CBS News, cited in the episode, shows that 20 percent of Americans believe President Obama was born “in another country.” Among that 51 percent, apparently, is Rep. Michele Bachmann. You might recall that Bachmann, in a Thursday morning interview with ABC’s Good Morning America, would not say whether Obama was a Christian and a U.S. citizen, saying instead that, “That’s not for me to state. When the president makes his statements, I think they should stand for their own.”