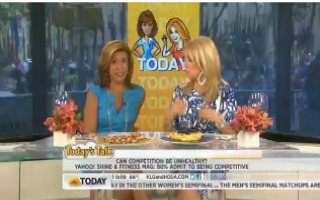 On Thursday, during the Today show’s fourth hour, hosts Kathie Lee Gifford and Hoda Kotb waded into some personal territory during a segment on competitiveness.

You don’t have to be the most avid of media watcher to gather that the opportunity Gifford is talking about is the Today anchor position Ann Curry recently lost to Savannah Guthrie… And it also doesn’t take a media expert to see that Kotb was fairly surprised that Gifford brought up the sticky subject on air.

“There is a survey out by Yahoo! Shine and Fitness magazine and it says that 80 percent of people admit to being competitive,” Kotb responded.

“Well that has recently happened around here and I was extremely happy for you!” said Gifford.

At this point, Kotb looked surprised.

“When you were considered for something wonderful,” Gifford continued. “I’m happy for you! If the person’s a friend, you’re thrilled for them!”

After taking a moment to thank Gifford, Kotb then quickly brought the conversation back to the topic at hand. “Most people,” she announced, “are competitive about weight.”