Kathleen Parker Doesn’t See Pres. Obama As “Only Black” Because They Are Cousins 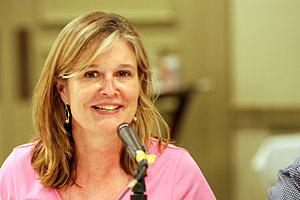 Washington Post columnist Kathleen Parker has heard the complaints against her latest piece, “Obama: Our First Female President,” loud and clear, and has issued a star-studded Fourth of July response piece admitting she stepped over the line complaining that people are too sensitive, and also pointing out that she is allowed to call Obama a girl because surprise, they’re cousins!

First of all, Parker lays out the issue with her original piece arguing that Obama’s femininity is hindering his effectiveness as president, just so that it is clear she understands why her column was so controversial:

“One, a black man cannot show anger in public lest he be considered an Angry Black Man.

Two, to suggest that a black man has any feminine characteristics, even when framed as an “evolutionary achievement,” is to emasculate and reduce him to a figure from Jim Crow days.”

To Parker, the issues that arose from her column were racial, not gendered. Yes, there were racial issues brought up in the piece, but a column called “The First Female President” about how Obama should be more macho has a lot more explaining to do in the sex department than the race one, and Parker seems to completely sidestep this. In fact, after explaining that she is aware of problematic race issues thanks to the work of colleague Jonathan Capehart and that she wishes people weren’t so sensitive, she reiterates the one point that was most upsetting to those who took issue with the original column’s sexist:

“Obama elected to employ a certain type of rhetoric in the Oval Office that put him in line with feminine rhetorical traditions and at odds with historical precedent and the expectations for his gender… Speaking as a cousin, and a not-so-sensitive columnist-citizen, I’m pulling for him to do better.”

In other words, Parker is “pulling for him to do better” than acting like such a girl. This thinking is what caused such a stir when the original article came out– not anything having to do with race– but Parker doesn’t seem to see that problem, or care to address it.

And the part about cousins? It’s true, and it’s one of the reason why Parker isn’t bothered by President Obama’s race– which, again, was not the the major issue with her original piece.

“As a sidebar, there’s another reason I don’t see him as only black. He is my cousin. I had intended to save this nugget for a future column, but now seems as good a time as any to brag.

I learned of this surprising family link when a cousin conducting genealogical research contacted me recently: ‘And by the way, did you know you’re kin to Barack?’

Apparently, we are descended of brothers whose parents — Johann Pieter Straub and Anna Maria Barbara Hoffman — emigrated from Germany to the colonies about 1733. According to the family grid, Obama and I seem to be eighth cousins once removed.”

That is an interesting factoid and everything, but if Parker was going to take the time to address the issues people had with her original column, the least she could have done is stuck to the topic of gender roles– the centerpiece of her column– rather than throw out the kitchen sink of distracting factors in the hope that someone will defend her for not being racist.