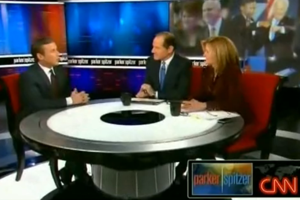 After asserting that she “led” the charge against Sarah Palin in 2008 the day before, Kathleen Parker revisited her comments and the greater media bias against Palin last night, adding a few revisions. For one, she didn’t really lead the charge against Palin– “the liberal media” did– and did treat Palin, in some instances, “cruelly, and partly because she’s a woman.” She and co-host Eliot Spitzer further explored the relationship between Palin and the media with Mediaite founder Dan Abrams.

Parker modified her earlier statement about “leading” the assassination, toning it down to being the first on the right after Palin’s damning interview with Katie Couric to question her qualifications. Spitzer jokingly suggested that Parker “enjoyed every minute” of being a contrarian voice on the right, something Parker argued was nearly impossible to do, and didn’t make the opportunity fun: “When you’re a Republican, you’re never supposed to say anything negative about another Republican, or else you will be banished into darkness.”

That’s not to say that Parker believes Republicans are all happy about Palin’s status in the party. Speaking later to Abrams, she argues that “the fact that she’s becoming the voice of the Republican Party has driven many Republicans crazy.” Discussing her relationship with the media, Abrams argues that, in 2008, being a fresh face from one of the most far-flung parts of the nation gave Palin “a real opportunity to become a media darling,” one she has forsaken in part because one of her strongest messages is that the media are worthy of scorn. In response to Spitzer’s claim that it was not the media, but the fact that Palin “touched a nerve” with Americans, Abrams argues that it is precisely her relationship with the media that reaches Americans: “One of the most important things that Sarah Palin is saying that is touching a nerve, that’s getting people to really support her is this idea of using the media as a villain.”

The full segment from last night’s Parker/Spitzer via CNN below: