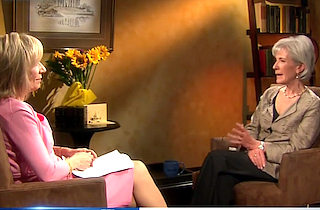 Heath and Human Services Secretary Kathleen Sebelius, who resigned Thursday after the tumultuous rollout of the Affordable Care Act, talked to NBC News’ Andrea Mitchell on Meet the Press Sunday morning and acknowledged the early troubles of the health care website, but praised the administration for its fast and ultimately successful turnaround of the rollout.

Sebelius also explained the timing of her resignation, which came after last week’s announcement that the ACA had reached 7.5 million sign ups but also followed months of bipartisan calls for Sebelius to be fired.

“I made a decision at the election that I couldn’t leave, along with a lot of my colleagues who left at the end of the first term,” Sebelius said. “That didn’t seem to be even a topic to even consider since there was still one more chapter in the Affordable Care Act to roll out…So staying on made good sense to me.”

“I also thought at the end of open enrollment was a logical time to leave,” she continued. “I went back to [President Barack Obama] in early March and said, I’m really optimistic we’re going to meet the targets. The enrollment is going well, the site is working well. I think once we finish this first chapter, you really should begin to look for the next secretary, who can be here through the end of your term. That really wasn’t a commitment I was willing to make, and he knew that.”

Mitchell asked whether Obama tried to talk her out of it.

“It made it pretty clear it really wasn’t an option, to stay on,” Sebelius said. “I thought it was fair to commit until January of 2017 or leave with enough time that he would get a strong, competent leader.”