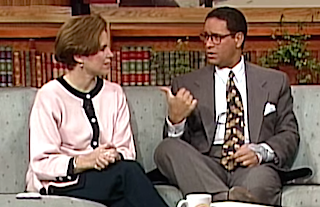 This new spot for the BMW i3 starring Katie Couric and Bryant Gumbel is an early frontrunner for best Super Bowl ad of 2015.

The ad, which premiered on the Today show Monday morning, begins with an expertly edited and/or recreated clip of the two former Today anchors talking about this new thing called the internet in 1994. They debate how to say the @ symbol (Gumbel thinks it’s “at” while Couric is pretty sure it’s “about”) and Gumbel asks, “What is internet anyway? What do you write to it like mail?”

Fast-forward 21 years and Couric and Gumbel, who now work for Yahoo News and HBO, respectively, are trying to figure out what this new electric BMW is all about.

“I’m kind of amused by the whole thing,” Gumbel told USA Today about the flashback ad. “I guess I’d simply say that in being so ignorant about it, I was just like everybody else – only I happened to be on TV showing my ignorance.”

“I think people our age relate to what we were saying, and people who are younger enjoy mocking us for saying it,” Couric added. “Although I think a lot of my contemporaries act like they were much more aware of what was going on than we were. And I think that’s a case of hindsight being 20/20.”

And then watch the original 1994 clip for comparison below, via NBC: