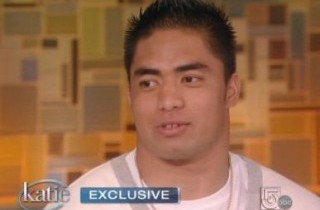 During her exclusive hour-long interview with Manti Te’o, Katie Couric pointedly asked the Notre Dame football star whether he was really a part of the hoax as a cover-up for alleged homosexuality; and grilled him on why he lied to his friends and family about having ever met the non-existent Lennay Kekua.

Couric confronted Te’o about his claims that he and Kekua tried to communicate through web-chatting programs, yet every time all he saw was a blank box. “Didn’t you think that was a little weird?” Couric asked.

“No? Are you that technologyically challenged? I am but someone your age shouldn’t be, right?” an astonished Couric asked.

“I saw a black screen and she said, ‘I can see you, you should be able to see me. I don’t know what’s wrong with your camera but I can’t see you,'” he explained.

Couric then asked why he wanted an online girlfriend when he is reportedly a “big man on campus.” He explained that Kekua connected with him over Mormonism and their similar ethnic background.

Then the daytime host confronted Te’o with the most controversial theories that exists in the wake of this scandal: “One of the many theories making the rounds is somehow you created this whole scenario to cover up your sexual orientation. Are you gay?” she asked.

When asked why he lied to his father that Te’o had met Kekua over a holiday break, the football star said, “I regret that the most and it was my way of trying to get my dad’s approval of this young lady because I knew that if he knew that I didn’t meet her, he would just say, ‘No, red flag.'”

“I felt overwhelmed a lot by this whole circus of events,” he gave as a reason for perpetuating the lie even after he knew Kekua was not real.