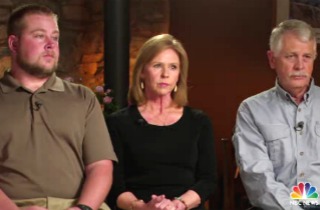 The family of Kayla Mueller, an American volunteer in Syria who was killed by ISIS, spoke out in an interview with NBC’s Savannah Guthrie, talking about Kayla’s life and the frustrations they have at the U.S. government for not doing more to save her.

The Muellers wanted to try and raise the millions of dollars needed to free Kayla because they genuinely believed she would be freed, but U.S. policy doesn’t allow for paying ransoms. Marsha Mueller, Kayla’s mother, believes the government wanted to help more, but says they grossly underestimated ISIS’ growing power.

Carl Mueller, Kayla’s father, expressed his frustration with the government for not doing all they could:

“We understand the policy about not paying ransom. But on the other hand, any parents out there would understand that you would want anything and everything done to bring your child home. And we tried. And we asked. But they put policy in front of American citizens’ lives.”

You can watch parts of the interview here, via NBC:

And you can watch a bit more here: