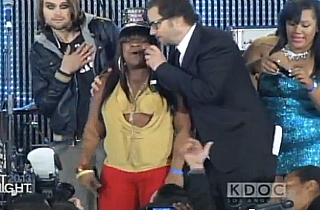 Okay, so lots of things have been said about this year’s batch of New Year’s Eve TV broadcasts — mostly about Kathy Griffin bending down to kiss Anderson Cooper‘s crotch on CNN’s air.

But forget that. Just forget it. It wasn’t important. After you read this post, none of those other faux-NYE messes will be relevant.

Why? Because independent local Los Angeles station KDOC’s New Year’s Eve special was the most glorious train wreck to ever grace New Year’s television. It’s so unbelievably bad that it becomes so very, very good.

Some of the highlights:

One intrepid YouTube user put together the highlights in an unedited video. Everything below aired on live TV and was not doctored at all (except, of course, when it was clipped and put into an abridged video).

Yes, it’s six minutes long but, for the love of God, stop whatever you are doing and PLEASE WATCH THIS (Very much NSFW):