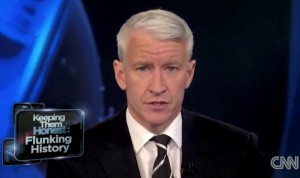 Last Friday Michele Bachmann gave a speech at an event for Iowan’s for Tax Relief that many reasonably saw as early effort to get a jump on the 2012 presidential campaign. News about her speech was less about a White House bid, however, instead focusing on her incorrect assessment of U.S. history in which she claimed the founding fathers were favored diversity and “worked tirelessly until slavery was no more.” Last night Anderson Cooper opened his show with his “Keeping Them Honest” that criticized the White House hopeful in pretty damning fashion.

Cooper is at his absolute best when he logically, dispassionately and methodically takes apart hypocrisies and absurdities in political rhetoric by elected officials, as he does in this case here. Read the rough transcript of the segment (provided by TV Eyes) followed by the video courtesy of CNN below:

Cooper: We begin as always, keeping them honest. Comments that are either a deliberate rewriting of our history or signs that Michele Bachmann has a shaky grasp on our history. Why does this matter? Is it just an attack on a controversial lawmaker? We don’t think so. Lots of lawmakers probably don’t know all they should about American history, TV show anchors as well. Michele Bachmann is repeatedly changing the history of the constitution. what she says matters, because people do listen to her, we think facts matter, particularly when it’s facts about our founding as a nation. Speaking to a group called Iowans for Tax Relief, Congressman Bachmann seemed to whitewash over our painful history of slavery. She air brushed herself some new history. Here she is talking about what people have faced throughout history when coming to America.

Bachmann: We know that was slavery that was still tolerated when the nation began. We know that was an evil and a block and a stain upon our history. But we also know that the very founders that wrote those documents worked tirelessly until slavery was no more in the united states. and i think it is high time that we recognize the contribution of our fore-bearers who worked tirelessly, men like John Quincy Adams, who would not rest until slavery was extinguished in the country.

Cooper: Again, Congresswoman Bachmann has her facts wrong, many of the founders owned slaves, George Washington, Thomas Jefferson who wrote all men are created equal owned slaves. Jefferson was conflicted about it, but others were not. the constitution itself establishes slaves as 3/5 of a person, a political compromise. as for John Quincy Adams, Ms. Bachman is right, he was a tireless campaigner against slavery. But he was not a founding father as she implied. This is not the first time she’s gotten the facts wrong or invented her own facts. Just recently on 360, she claimed President Obama’s trip to Asia would cost $200 million a day. We proved how that was unfounded. Plenty of other examples, we focus on this tonight, not just because she’s going to be speak tomorrow night, but because we believe facts matter, particularly where our history is concerned. One of the many things that makes this country great is we are able to examine our best, we are at our best when we learn from the past. Rewriting history doesn’t do anyone any good. It doesn’t honor our history.