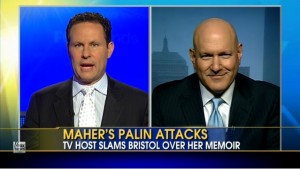 Today on Fox & Friends, Fox News contributor and professional psychiatrist Keith Ablow gave his assessment of HBO’s Bill Maher based on his recent rant about Bristol Palin. Maher, you’ll recall, went after the younger Palin for a passage in her new book, Not Afraid of Life, where she describes losing her virginity to Levi Johnston, her then-boyfriend and father of her child. During his show, Maher asked Bristol to simply admit that that she was “horny” and shared that “Bristol Palin has to admit that the reason she fucked Levi over and over until a baby fell out is because she liked it.”

Ablow wonders whether Maher’s diatribe stems from an overarching hatred of women.

This guy needs his head examined, so it’s good that you called me in. Bottom line is, here’s a guy… You have to understand, her book is called Not Afraid of Life. Here’s a guy who never saw a life he didn’t question. For euthanasia. For the death penalty. For abortion. This is somebody who’s not affiliated with life at all. No children. So you have to look at him and say, “You know what, why is he so hostile toward women?” He has a deep-seated, it seems, hatred, to some extent, of women. Frequents the Playboy Mansion. All the girls that he dates – the women he dates – they have to be supermodels.

Bottom line is, you really have to wonder: Is he projecting onto her?

Ablow also notes that Maher “is very much divorced” from the “beauty” of birth, as evidenced by his comment about a baby “falling out” of Bristol, and that he seems to want to believe that “all women are sluts,” and so wouldn’t be able to believe that Bristol slept with her boyfriend out of anything other than lust.

Now, I’m generally not a fan of armchair psychology, because so much of it is based on pure speculation. Besides, it’s difficult, if not completely impossible, to gauge whether pundits like Maher are being completely genuine, or whether they are making wild, broad, sensational statements to drum up viewership or sell books or push movie tickets. Maybe Maher is a corrupt, twisted creep of a person whose heart resembles the floor of a Coney Island public restroom during the height of summer. Or maybe he’s a thoughtful and intelligent but somewhat ruthless individual who wants to play his viewers and others in the media to his benefit.

Suffice to say: His comments about Bristol don’t help his case, nor do they help his image. If this young woman and her mother are, as his weary head shakes and dramatic sighing seem to indicate, so silly and frivolous and unworthy of the attention they receive, why dedicate time to eviscerating the sexual experiences of a girl looking back on her teen years?

Look, I don’t know whether Maher hates women. I don’t know if he has deep-seated mother issues, or if he’s replete with self-loathing. And I don’t care. The psychology behind Maher’s comments is not the issue. Maher is simply a symptom of the culture we live in, where pundits are permitted – and expected – to hate others because they hate their political beliefs or what they represent. His comments don’t have anything to do with him as a person, and they likely have nothing to do with Bristol herself. This is simply a case of ideologically opposed public figures playing their parts to entertain an audience. And people like Maher will continue to feed into this cycle until viewers decide to change the channel. Until then, he’ll continue to say hateful and sometimes cringe-inducingly awkward things about the sexual proclivities of a teenage girl, and strangers will attempt to give him psychiatric assessments without ever having spoken with him.

Instead of bread and circuses, we have Triple Double Oreos and Real Time with Bill Maher. Slightly less blood, but just as gruesome.