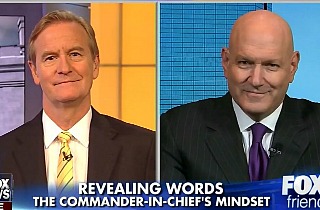 Psychiatrist and Fox News Medical A-Team member Keith Ablow engaged in some psychoanalysis of President Barack Obama on Wednesday’s Fox & Friends. He said that Obama sees himself as the “victim-in-chief” and is attempting to share that victimhood with the nation.

“In the words ‘hostage taking,’ ‘being held for ransom,’” Ablow began, “there’s a real victim mentality here, and it really explains the president’s whole mentality and many of his policies.”

“I think the president – going back to when his dad abandoned him, when his mother left him with his grandparents, when he describes his grandmother as intimating that she didn’t trust people of color – that all of those things led him to feel victimized, hurt, and injured,” Ablow said. “And he has extended it to this country.”

Ablow added that Obama is now offering “the mantel of victimization to as many people that will share it with him as possible.” He cited the extension of welfare programs like SNAP and unemployment insurance to more people under Obama’s administration is proof of this psychological impulse.

“You don’t negotiate with people who are trying to kill you and have kidnapped you,” Ablow said in an effort to explain Obama’s negotiating position against Congressional Republicans. “It explains really everything about this president.”

“The Republican Party is all about autonomy – what can you make of yourself,” Ablow added. “That’s not the president or his party.”

Ablow concluded by saying that Obama’s goal has always to be to attain power in order to effect “retribution” and to “balance the scales” in order to address his own sense of victimhood.