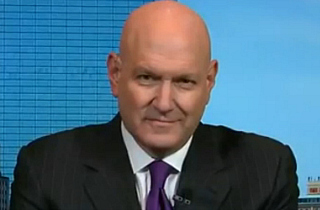 Fox’s resident “psychiatrist,” and Mediaite’s dear old friend, Dr. Keith Ablow is back in action after a month or so of not psychoanalyzing people he’s never met.

In the past, he’s claimed that President Obama supports “big government” because his grandmother distrusted black people; another time he suggested the president is ruining America’s children. This time, like a sitcom trying to elevate its ratings, he’s taken his weary conceit on the road for an international episode.

This morning, FoxNews.com published a Blowhard Doctor™ opinion piece about Russian President Vladimir Putin and the psychological lift he receives from the “inherently weak” American leader: “I believe Putin’s psychology is being directly fueled by President Barack Obama,” the Fox shrink asserted.

Ah, the Batman/Joker defense—a simple way to deflect the responsibility of the madman by blaming those with equal power who exercise it with restraint and a sense of morality. By that logic, perhaps a saner Russian psychologist is very much complicit in the ranting and ravings of Dr. Ablow himself?

What coin is that, Dr. Ablow? The one you just pocketed?

More absurd than his argument is Ablow’s magical couch itself which appears to traffic in phantom guests whom he’s never met, of all genders and races. Perhaps Dr. Ablow should forgo anymore psychoanalysis of American public officials and grant his international quackery a permanent residence elsewhere.