Keith Olbermann And Nazis: A Record Of Over The Top Hyperbole 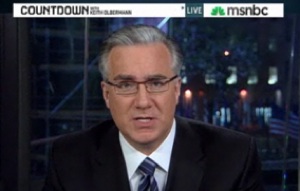 President Obama’s compromise with Republicans over tax cuts is continuing to get liberals testy; however, no liberal ever comes close to the dramatic outrage that MSNBC’s Keith Olbermann musters daily. Such passion can be commendable in fact, Olbermann’s fierce loyalty to principles rather than people, and his willingness to fight for liberal ideals rather than blindly trusting Democratic politicians is one of the things that most endears him to viewers. But there is nothing endearing about his now regular comparisons to Nazis, in a (failed) attempt to elevate the seriousness of the given issue.

Hyperbole is one thing, but it is utterly reprehensible to make repeated comparisons to a period in history when six million Jews were executed in concentration camps, unspeakable acts of brutality and cruelty were committed against many more and a savage dictator attempted to form an Aryan empire. Most recently, Olbermann believed it appropriate to compare Obama’s surrender to Republicans on taxes as akin to Prime Minister Neville Chamberlain’s appeasement of the Nazis in signing the Munich Agreement. Yes, apparently the Republicans are like Nazis because they argue that a lower tax rate on the wealthy would be a better stimulant to the economy than higher taxes.

Whether you agree or disagree with this proposition isn’t the issue, nor is whether you think this tax system is totally unfair or even intellectually dishonest. What is relevant is why a nationally known commentator on a major network would deem it acceptable to repeatedly use the Nazi comparison to gain political points. Sure, make the argument that the Democrats should not have caved—but why does Olbermann always have to drag Nazis into the conversation?

That is not to say that comparisons to Nazis can never be relevant; they would be when discussing other genocides. The problem here is that he uses the reference so often and its use is so trite. In fact, Olbermann’s Nazi analogies are so uninspired that his latest is actually just a rehash of the same exact argument he made just a few years ago (see #1 and the clip below). The Democrats already had an Olbermann-defined “Chamberlain moment” and despite his previous outrage, apparently both Olbermann and Democrats learned nothing from the past.

Here is just a quick top ten list of Olbermann’s Nazi-related quotes, that I found in a matter of minutes of research (there are others by the way).

Apparently [callers to Bill O’Reilly’s radio show who mentioned my name on air were told] that FOX security would then contact the local authorities . . . And two or three of these people who did call up and mention my name actually got phone calls from FOX security. Which is, you know, fascinating if, you know, we‘re living in, say, Nazi Germany, it‘s a good idea[.] – Colbert Report

At a meeting of television critics, Olbermann jokingly(?) held a paper cut out of O’Reilly’s face over his own face and flashed the Nazi salute, attempting to imply that O’Reilly sympathizes with Nazis.

Facially, it finally dawned on me that the person Ken Starr has reminded me of all this time was Heinrich Himmler, including the glasses. –Quoted from The Big Show with Keith Olbermann

‘They came first for the Communists, and I didn’t speak up because I was not a communist . . . .’ Pastor Martin Niemoller‘s words are well known . . . . Niemoller survived the death camps. In quoting him, I make no direct comparison between the attempts to suppress the building of a Muslim religious center in downtown Manhattan, and the unimaginable nightmare of the Holocaust. Such a comparison is ludicrous. At least it is, now. –MSNBC Transcript

On August 4, 1939, the prime minister of Great Britain, Neville Chamberlain, adjourned the British parliament and ordered it reconvened on October 1. He went on vacation. Eighteen days later, the Russians and Germans signed a nonaggression pact, removing the last obstacle to the Nazis rolling through Europe. . . . Chamberlain was on vacation. World War II started nine days later. . . . [T]here barely is or barely isn‘t a civil war in Iraq, and the intensity of the conflict between Israel and Hezbollah continues to spiral upwards. But President Bush, right on time, started his vacation today. –MSNBC Transcript

After the Germans lost the First World War, it was the ‘back-stabbers and profiteers’ at home, on whose lives the National Socialists rose to prominence in the succeeding decades and whose accused membership eventually wound up in torture chambers and death camps. . . . And now Mr. Bush, you have picked out your own . . . ‘profiteer’ — your own scapegoat [Senator Hillary Clinton and anyone who publicly discusses potentially withdrawing troops from Iraq]. –MSNBC Transcript

Now [extending immunity from lawsuits for telecom companies who comply with government requests for information on suspected terrorists] begins to look like the bureaucrats of the Third Reich trying to protect the Krupp Family industrial giants by literally re-writing the laws for their benefit. And we know how that turned out: Alfried Krupp and eleven of his directors were convicted of War Crimes at Nuremburg. –MSNBC Transcript

Floyd Abrams, who has spent his life defending American freedoms, especially freedom of speech. Apparently this life was spent this way in order to guarantee that when it really counted, he could help the corporations destroy free speech. . . . He will go down in the history books as the Quisling of freedom of speech in this country. –MSNBC Transcript

[Quoting Dr. Warren Hern, late-term abortion provider] ‘Bill O’Reilly is a disgrace to American society. . . . O’Reilly is a fascist and would fit right in Nazi Germany, as far as I’m concerned.’ There it is. Bill O’Reilly will never understand that the people who agreed with him on Tiller the baby killer . . . use bullets and bombs and he, O’Reilly, has voluntarily associated himself with and encouraged them.

1) Democrats Are Just Like Chamberlain For Making A Deal With Those Nazi-Like Republicans! – May 23, 2007

That’s what [a compromise with President Bush on funding for the continuation of the Iraq war] is for the Democrats, isn’t it? Their ‘Neville Chamberlain moment’ before the Second World War. –MSNBC Transcript

As a result of Olbermann’s frequent Nazi mentions, viewers may already be numb to the harm, but that certainly doesn’t make it right. Olbermann himself recognizes that when others play the Nazi card it is worthy of denunciation (and “Worst Person in the World” distinction). Instead of concluding Olbermann is merely a hypocrite and move on, consider this attempt to shed light on Olbermann’s own Nazi-addiction as an intervention. The aim is to eliminate extraneous Nazi references from the national discourse, and if Olbermann can realize he has a problem, then all of us would be well along towards achieving that goal.