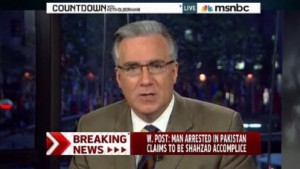 During a segment on last night’s Countdown, host Keith Olbermann turned a popular right-wing talking point on its head, asking Newsweek’s Jonathan Alter if a prominent Republican like Senator Kit Bond (R-MO) might “not want to prevail in the so-called War on Terror” with a Democrat in the White House. He also defended the use of Miranda warnings by pointing to the results in the Times Square case, which produced a number of raids this week. While satisfying in the moment, this point-scoring is ultimately self-defeating.

Olbermann has some fun at Bond’s expense, referencing an anonymous report that says the Missouri Republican fell asleep during a Justice Department briefing. The same report has Senator Orrin Hatch (R-Utah) stating, on the record, that Bond was awake and simply trying to avoid “light burn.” I wish I had known about this condition back when I was in algebra class.

Here’s the segment, with the titular exchange occurring at around the 6 minute mark:

Aside from evoking an awesome Knight Rider/007 team-up, the Kit Bond segment illustrates the problem with adopting right-wing strategies, even jokingly. While liberals might collectively shout “Zing!” at the notion that wingnuts are having their “wants the terrorists to win” crapola fed right back to them, this only serves to legitimize the attack in the first place, and it distracts from the real problem.

As Alter states, of course Republicans want to win the “War on Terror” (inaccurate shorthand though it is). They just don’t want President Obama to be able to claim any part of the victory. That’s what all of this second-guessing is about, so that if there is a successful attack, they can point and say “See?” Even when an attack fails, they conjure an imaginary future attack and say “See?”

On the subject of Miranda, the argument that it seems to be working out only serves to promote the notion that America’s commitment to the principles of liberty and justice are results-based. In the realm of terrorism, one bad result can wipe all of that away. The question isn’t whether or not it works, but whether or not it’s right.

To his credit, Olbermann hasn’t taken the cheerleader role when it comes to Attorney General Eric Holder‘s contention that more flexibility is needed regarding Miranda. He is among the critics on the left who point out that the public safety exception offers more than enough latitude, and that weakening Miranda further endangers core American principles.