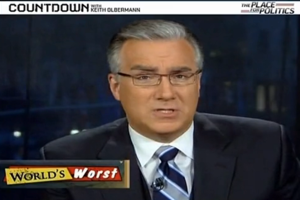 Last night, Bill O’Reilly made a flimsy argument that Jennifer Aniston (of all people) is a threat to America for encouraging little girls to consider single parenthood. In an unprecedented move, Keith Olbermann made O’Reilly one of today’s Worst Persons in the World. This near-daily occurrence would usually merit little more than a yawn, except the crux of Olbermann’s argument was that O’Reilly made this point because he was abused by his father as a child.

Olbermann gave O’Reilly his “Worser” award tonight for the comments, which he rehashed in their entirety against Aniston’s (also transcribed for the viewers). The argument was that Aniston calling the fact that older women can now reproduce “amazing” is a dangerous message to American girls who could misinterpret this as meaning that fathers are unnecessary in raising a child. Yes, it’s a pretty silly argument, and fairly easy to debunk on the grounds that, for starters, the type of single parenthood occurring in Aniston’s new movie (where she goes to a sperm bank to pick out a “father” but then– surprise! drunk Jason Bateman hijacks the motherhood attempt) is probably not the type of Teen Mom situation that O’Reilly is warned about. That, however, isn’t the argument route Olbermann took:

“There’s been a lot of amateur psychoanalysis of what O’Reilly is doing this time. If you’ve read Marvin Kitman‘s biography of O’Reilly, it’s pretty simple: Virtually every reference O’Reilly makes to his own father describes how the man hit, slapped, punched him. As Kitman put it simply: ‘O’Reilly has a history of physical abuse with his father. It is actually very sad.'”

To sum up the argument: O’Reilly says telling young women that they can be single parents later in life is detrimental to society. Olbermann says O’Reilly is the victim of child abuse. Talk about bringing a predator drone to a knife fight. (Update: and this isn’t the first time Olbermann brings this up).

Whether or not the allegations made by Olbermann via Kitman’s book are true are beside the point. Child abuse is not a political grenade to toss hastily at people you don’t like. No one’s childhood– especially if said childhood is believed to be traumatic– should be fair game to score political points. It is nearly unavoidable these days that some degree of argument on cable news is ad hominem, if only because people that spend long periods of time on television develop a reputation. This is not ad hominem. This attack has nothing to do with Bill O’Reilly in any professional or personal capacity, and only with speculation on a very serious topic that tosses it to the realm of the frivolous.

Then there’s the touchy subject of fathers in general, and how often Olbermann likes to discuss his own seemingly beautiful relationship with his father. Olbermann’s attack takes nothing away from the positive impact of having a major cable news figure routinely emphasize how important a father is in the development of the child– the world can never have enough of that, and Olbermann’s regular James Thurber segments are stellar programming. That is precisely why he, of all people, should know better than to bring someone else‘s deceased father into play in the cable game. O’Reilly would be ripped to shreds for doing something similar with Olbermann’s father, and rightfully so.

Olbermann’s worsts (via MSNBC) is below: