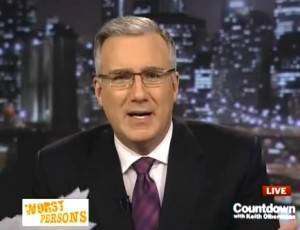 During his “worst Persons” segment Tuesday night, Countdown host Keith Olbermann addressed Paul Krugman‘s brief, controversial 9/11 column with the kind of full-throated agreement that would make Dizzy Gillespie envious. The object of his ire was not Krugman, but Former Defense Secretary Donald Rumsfeld, who canceled his New York Times subscription over Krugman’s post. Olbermann concluded the segment by saying that, “between 2002 and 2009, the leading terrorist groups in this country were the Republican Party, and the presidential administration of George W. Bush.”

For reasons I’ve detailed earlier, Krugman’s assertion that the anniversary of 9/11 has become “an occasion for shame” are simply inexcusable, and Krugman’s critics also have a valid point about the timing of his piece, allowing partisan bitterness to intrude on such a solemn occasion.

The one thing that Krugman got right, though, was the deep division that occurred in this country in the years following 9/11, and while his connection of that division to our commemoration of 9/11 was sickening, the fact that so many conservatives were offended for Bush & co., and not Krugman’s attack on the sacred occasion of the 9/11 anniversary, was nearly as sickening.

Olbermann’s overarching point seems to be to challenge Rumsfeld’s standing to take offense, given his role in creating those divisions, but his refusal to acknowledge that an offense was committed dooms his argument to failure.

Conservatives will likely seize upon his calling Republicans “terrorists” as a violation of the “new tone” that Olbermann regrettably signed up for earlier this year. I have no problem with the metaphor on those grounds, but while it fit the circumstances of the debt ceiling debate as a metaphor, it doesn’t really work here. If the idea is to call the Bush-era Republicans villains, you can’t just plug in any random villain. Terrorism is a specific kind of tactic, and what Republicans did after 9/11 (with significant help from Democrats and the mainstream media) was to succumb to terrorism.

Again, though, I can’t say this strongly enough, the anniversary of 9/11 will never be, should never be, an “occasion for shame” for any American, for whatever ill that followed it was not born that day, nor was it abetted by those we remember. Krugman, and now Keith Olbermann, ought to recognize that.

Here’s the clip, from CurrentTV: