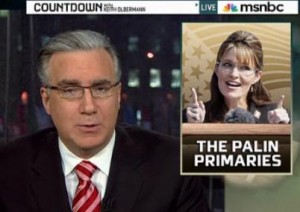 I know, you’re probably thinking what I was, “He’s not actually calling her a tool, is he?” In a tease to commercial on last night’s Countdown, Keith Olbermann did a short meditation on how “Former Half-Governor Sarah Palin” could end up being a tool for Republicans, a tool for Tea Partiers, and a tool for Democrats in the midterms. Had he left it at that, he would have completed a did-he-or-didn’t-he, deniable slam on Palin. Instead, much like his Carrie Prejean self-love slam, he just couldn’t resist hanging a lantern on it.

Also like his Prejean masturpiece, this little gem isn’t available on the Countdown home page, but we’ve got the clip for you:

For the uninitiated, “tool” is another derisive term for the male member, shall we say “unit,” which seems to give added meaning to the still they used in the actual Palin segment.

At first blush, the joke evokes the kind of outrage it was obviously intended to. The left has long been unable to crack the code that allows the every utterance of a Rush Limbaugh to explode in the atmosphere and hang over the media landscape like a radioactive cloud. This smacks of that kind of attention-seeking behavior.

Be that as it may, the question I asked myself after that initial reaction was this: Who calls a woman a “tool?” It doesn’t even make sense. It’s like calling a fern “ornery,” it just doesn’t work as an insult.

In today’s media climate, it’s rare to see someone succeed without resorting to name-calling, and the well-executed takedown is certainly a popular enough feature. Still, when you result to nonsensical vulgarity, aren’t you really saying more about yourself than your intended target?

This bit was short and stealthy enough that it probably won’t make it onto Palin’s Facebook radar screen. If it does, though, I’ve got some grade A “satire” ready to go.