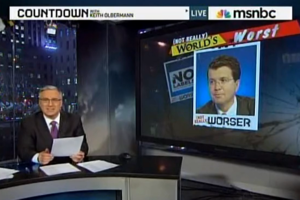 Fox News’ Neil Cavuto delivered a swift tongue-lashing recently to MSNBC’s Chris Matthews for his concerns about New Jersey governor Chris Christie‘s weight, calling any concern or mockery about the matter “racism with a scale.” Tonight, Keith Olbermann refused to refute the claim that weight prejudice was “racism with a scale,” though he heaped some dirt on Cavuto’s credibility on the matter, digging up an old clip of the latter promoting just that.

The victim of said “racism” was a presidential nominee for surgeon general Regina Benjamin, who Cavuto then described as “not a lot fat, but fat enough fat for my next guest to say ‘fat chance,'” in an old segment Olbermann dug up. For this Cavuto won his runner-up spot on Olbermann’s “Worsts” segment today, where he railed against Cavuto’s “hypocrisy.” “When there are fat jokes about a Republican, that’s racism;” Olbermann mocked, “[and] when there is a fat joke about a presidential nominee for surgeon general, that’s a segment.” He also pointed out that Cavuto made a “Depends joke” during Sen. Bernie Sanders’ filibuster last week, but did not give any background as to what set Cavuto off initially– namely, colleague Chris Matthews’ comments about Governor Christie’s weight. Instead of arguing on the weight discrimination front, Olbermann goes straight for the hypocrisy angle– leaving Cavuto ample space to argue past him should he wish to respond. Given the amount of passion in Cavuto’s original excoriation of Matthews, it will be fun to see how he reacts to this new runner-up title for sticking up for New Jersey’s big man.

The segment from tonight’s Countdown via MSNBC below: