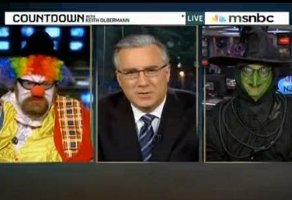 Give Christine O’Donnell this: the controversies surrounding her haven’t been boring. From the line from way back when about dabbling in witchcraft to the more recent hand-wringing over whether her father Daniel did, in fact, ever play Bozo the Clown, O’Donnell’s name is consistently at the center of something bizarre. Tonight, Keith Olbermann decided to satirize these controversies – only in doing so, he upped the weirdness ante and created one of the strangest six minutes of television ever committed to the small screen.

After an intro segment in which he explained the Bozo controversy and looked at O’Donnell’s new campaign ad in which she definitively declares she’s “not a witch,” Olbermann discussed O’Donnell with “Bozo the Clown” (played by comedian Angry Bob), and a “witch” (played by columnist Michael Musto). If you think this sounds like something one might normally imagine while tripping on acid…yes. You are correct.

As you will see in the video below, Bob (whom Olbermann referred to as “Mr. Zo”) and Musto went all out, donning full outfits and makeup for their roles. And that doesn’t even get into what they said. Mr. Zo expressed outrage that anyone could “dabble” in clowning (Daniel O’Donnell was a replacement Bozo), saying he “spent $20,000 on huge foot implants” in order to dedicate himself to his craft. The witch was indignant that O’Donnell renounced witchcraft, saying, “Christine, what are you saying, you don’t have a broom up your ass? I know I do,” and “I know for a fact that her favorite food is toe of frog and eye of Newt Gingrich, and she gets it every Monday at Olive Garden.” Again: actually happened.

You can watch the clip below, but be warned it may force you to do a double take, then a triple take, possibly followed by a mental breakdown along the lines of John Nash in A Beautiful Mind. You’ve been warned.