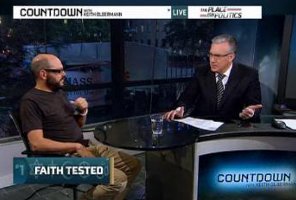 The survey conducted by the Pew Forum on Religion & Public Life that found atheists and agnostics generally know more about religions than the people who practice those religions has plenty of people talking – including Keith Olbermann, who expounded/riffed on the results with actor/comedian/outspoken atheist David Cross on tonight’s Countdown.

Especially amusing to Olbermann were the revelations that a majority of Protestants surveyed couldn’t pinpoint Martin Luther as the person who initiated the Protestant Reformation, and four out of 10 Catholics answering questions about Holy Communion incorrectly. To Cross, though, it made sense:

“The more you know about how religion came to be…illiterate people writing down stories for other illiterate people that were then edited over time – all based on fantastic, word-of-mouth…decades and decades, sometimes hundreds of years after the event took place – the more you realize that maybe it’s not so legit, and then you start questioning things and it’s a domino effect.”

Cross’ point was similar to that of Alan Cooperman, the Pew’s associate director for research, who told the L.A. Times that atheists and agnostics “are people who thought a lot about religion…they’re not indifferent. They care about it.” Cross went on to say he thought it made sense that Mormons did relatively well on the survey, as it’s a relatively new religion. And on 59% of those polled also not knowing who the vice president of the United States is, Cross said, “I’m sure the majority [of] people who couldn’t answer who the vice president was could tell you who won American Idol five years ago.”

Although many religious people are certain to dislike Cross’ comments, overall, he was reserved (for him). Video of the Countdown segment below and here’s a video of what Cross might say if he really feels like unleashing (warning: link NSFW).