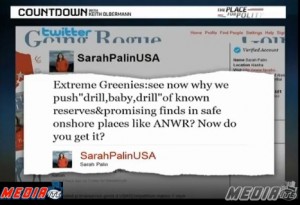 While reporting on Keith Olbermann‘s enshrinement of a deleted Sarah Palin tweet yesterday, I came across a newer, arguably stupider gem from her Twitter feed. In one of the worst attempts at revisionism ever, she tried to re-frame her “Drill, Baby, Drill!” refrain as a disclaimer-laden plea for environmental responsibility. On last night’s Countdown, Keith destroyed her premise so thoroughly during the opening credits, his quick comment was completely unnecessary.

Here are the devastatingly effective opening segment and the Quick Comment:

Thing missing from Palin’s tweet was the phrase “Yeah, that’s the ticket!”

Even dumber than the dishonesty, though, is the fact that Republicans like Palin have been getting a pass on the spill, as most of the pressure has been focused on President Obama. All this does is remind people that Republicans pushed hard for years to create the conditions that led to this disaster. It would be like Mrs. O’Leary’s cow holding a press conference to brag about her fire prevention efforts.

For some reason, it never occurred to me that “Drill, Baby, Drill” was a double entendre, but it makes perfect sense, especially in light of Palin’s (possibly unintentional) rape metaphor. The fact is, even granting Palin’s dishonest premise, oil companies aren’t even drilling on the tens of millions of acres they already hold leases for. During the 2008 campaign, Barack Obama and the Democrats supported legislation that would compel oil companies to drill on 68 million acres worth of leases (containing 81% of America’s federal oil and gas reserves), or lose them. Guess who defeated that bill?

With all those resources untapped, conservatives like Palin still can’t wait to jam their throbbing drill bits into the Alaska National Wildlife Refuge, and until about 5 minutes ago, were all in favor of going deep offshore.

So, who is it, again, that’s pushing the drilling offshore? Maybe by “Extreme Greenies,” she means the oil companies that make all the green.