Keith Olbermann Gets His Arks Mixed Up

Keith Olbermann Gets His Arks Mixed Up 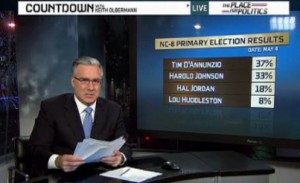 On last night’s Countdown, host Keith Olbermann teased a segment about Tea Party-backed congressional candidate Tim D’Annunzio with a pretty funny wisecrack about Arizona’s infamous “Show me your papers!” law. It seems D’Annunzio once claimed, in court papers, to have found the Ark of the Covenant in Arizona. Olbermann, who has taken to ending every Sarah Palin segment with the mantra “That woman is an idiot,” remarked that the animals getting on the Ark had better make sure they have their papers.

In case you’re not up on your Ark lore, the Ark of the Covenant isn’t the one with the paired-up animals from Schoolhouse Rock, or the pimped-out RV that only fits 3 people and a chimp from Ark II. It’s the box that can melt Nazis like crayons from Raiders of the Lost Ark.

Now, before all of you Olbermann detractors start your Nelson Muntz point-and-laugh sequence, I feel the need to defend Keith here. First of all, if a line is funny enough, a little factual license is not a big deal. He could have constructed the joke to take the differing Arks into consideration, perhaps by saying “It’s a good thing he found the Ark of the Covenant, and not Noah’s Ark…,” but that would have significantly deadened its impact.

There’s also the possibility that Keith made the gaffe intentionally. I do that sometimes. I’ll deliberately get something wrong in a Star Trek reference, maybe mix in a Star Wars character, just so I can then identify and mock whichever obsessive dork decides to call me on it. “Excuse me, sir, but the Vulcan science officer aboard the Enterprise is not Doctor Spock, the noted baby and child care expert, and he would never have occasion to meet a Moff of any kind, Grand or otherwise!!”

The irony there is that I have to be kind of an obsessive dork to throw down those bread crumbs in the first place.

Anyway, it was still funny. Asking giraffes for their papers, lol.

@DrMathochist You realize we are now disputing what WASN’T on what the psycho DIDN’T find :)

Right, Keith. Next, you’ll tell me there’s no Temple of Doom.