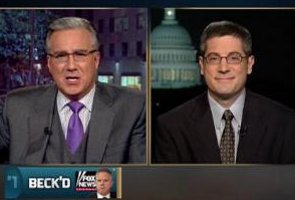 Olbermann singled out passages from the profile that said Roger Ailes “has complained about Beck’s hawking his non-Fox ventures too much on his Fox show,” as well as Ailes’ feeling that “Beck does not fully appreciate the degree to which Fox News has made him the sensation he has become in recent months.” Oh, and there’s the matter of some journalists at Fox News not being fond of Beck’s shtick, and that nearly 300 advertisers don’t want ads featured during his show.

Needless to say, all manna from heaven for Olbermann, and he brought in Paul Waldman from The American Prospect to talk it over. Olbermann could barely contain his glee as he delivered the line:

“The gist of this is, in the Times, that Glenn Beck is the universal solvent? He’s great at first, and then you realize: you don’t have anything in which to keep him, ’cause he eats through everything?”

Waldman, for his part, said Beck “offer[s] something pretty compelling to his viewers” in telling them that “the end is near.” He also figured, though, that “there’s only so long you can kind of sit there on the edge of your seat grinding your teeth, thinking that the walls are all falling down and Armageddon is around the corner” before people stop believing you. Video of the conversation below.