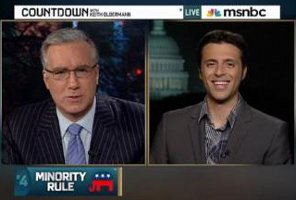 Last night Keith Olbermann devoted a segment on Countdown to a deal Senate Majority Leader Harry Reid struck with Minority Leader Mitch McConnell involving President Obama and recess appointments – specifically, that the President now can’t make them because Reid will keep the Senate “in session” on a technicality. (He once cut a similar deal so President Bush couldn’t make recess appointments.) Olbermann, as you might expect, was not thrilled about this deal.

The reason he didn’t like it: he didn’t think the Democrats got enough in return for giving up the recess appointments. Here’s the benefit they receive, via Politico:

It ensures that Republican senators can’t send Obama’s nominees back to the White House, which would have forced the administration to renominate the choices even if they were partially through the legislative process.

Of course, with midterms close at hand and control of Congress at stake, there were purely political considerations for Reid as well (to say the least), as well as the benefits outlined above – imagine how easy it would have been to make Democrats look bad if they refused to budge on this deal.

All this, however, wasn’t nearly enough for Olbermann, who called it a “highly lopsided compromise” – as well as the “cave-in” outlined in the title of this post – and attributed it to fundamental differences in Republicans’ and Democrats’ views on compromise (he cited poll numbers in which almost a 2:1 majority of Republicans admired those who stuck to principles no matter what, while a majority of Democrats admired those willing to compromise).

Olbermann’s guest, Ezra Klein, wasn’t a fan of Reid’s deal either, and wrote as much earlier yesterday. On Countdown, he said he fears stalling tactics on appointments will ultimately lead to fewer talented people in government, since no one will want to deal with the protracted confirmation process. Video of the segment below.