Keith Olbermann Is Just Another Notch For Jon Stewart

Keith Olbermann Is Just Another Notch For Jon Stewart 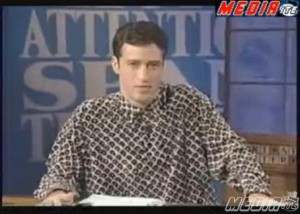 Give credit where credit is due: Keith Olbermann‘s Friday apology, however slight, was a rare thing, indeed, in the world of political punditry. Responding to a scorching Jon Stewart parody of Countdown‘s Special Comment segment, Keith gently needled the Daily Show host’s early work, offered to come on his show, and mildly conceded Stewart’s point.

While I don’t doubt that Keith had a true moment of self-recognition here, I’m also fairly certain that this apology was equal parts reflection and self-preservation. Will it be  enough to stave off the Jon Stewart Wrath-O-Matic?

Let’s face it, this isn’t the first time someone called Olbermann out, but usually, the result is an appearance on Keith’s Worst Persons in the World. In Jon Stewart‘s case, he would have had ample grounds to point out that, like a chiropractor pestering a neurosurgeon, only one of these guys has to end up owning his mistakes. Jon Stewart does a wonderful job of calling people out, aided in large part by the “I’m just a comedian” forcefield.

Instead, Keith starts out with some good-natured ribbing about Jon’s early-90’s stint as the host of Short Attention Span Theater, and doesn’t even dig up a clip of the frozen-in-1989 Stewart. Like we did:

Short Attention Span Theater, by the way, was an awesome show. It was like MTV for stand-up comedy, the MTV that used to show videos, not this MTV.

The apology is what’s getting all the attention, but for my money, Olbermann’s self-invitation to The Daily Show is the real story here. It is precisely this kind of tete à tete that has been the demise of previous Stewart prey, and a big factor, I think, in Keith’s handling of this.

For example, who can forget the now-infamous beating Stewart gave Tucker Carlson and Paul Begala on Crossfire?

That thing was so painful to watch, I actually felt sorry for Tucker Carlson. But only a little.

More recently, CNBC’s Jim Cramer presented himself to be carved like a tower of ice to Stewart’s Edward Scissorhands.

There is little doubt that public tarrings like these had to factor into the care with which Olbermann responded.

More importantly, though, how will Jon Stewart respond? Until now, he’s largely given Olbermann a pass. This is probably due to the fact that the two travel the same territory, one in a stretch Prius, the other in a Klown Kar (I think Chrysler makes those).

But any truth-telling out-caller should be able to see Keith’s response for what it is: a deflecting self-wrist-slap. In the short interval between Jon Stewart’s takedown and Keith’s admission that he’s been “a little over-the-top lately,” Olbermann actually went so far over the top that he got a cease and desist order from Sylvester Stallone.

Will Keith get that call to appear on The Daily Show, and if so, will Stewart call him out? My guesses are yes, and probably not. They’ve each got bigger fish to fry, and they don’t need to shit where they both eat.