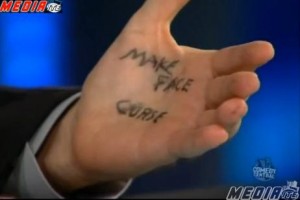 Hyperbole must be over. How else does one explain the extremely disappointing bits that Jon Stewart and Keith Olbermann did on Sarah Palin last night? Handed (thank you, I’m here all week) 3 days of Palin material that rivaled anything George W. Bush ever gave them, Olbermann could barely manage a molecule of spittle, let alone a lather, and Stewart deployed his seldom-used Nerf™ jokes.

Have these Sovereigns of Smackdown gone soft? Are these Sultans of Snark running scared? How is any of this supposed to result in an outraged rebuttal on Palin’s Facebook page?

I’ll start with Stewart, because his bit was merely lame. He resorts to the comedy stylings of NBC News’ Andrea Mitchell, completely misses the chance to show GOP all-stars using the dreaded teleprompter, gives Palin and the Tea Party a pass on Tom Tancredo’s Jim Crow nostalgia, and fails to point out the central point of hand-gate: That Palin knew what questions were coming, and still needed a cheat sheet.

He also leaves out any mention of Palin’s defense of Rush Limbaugh, but only because he was saving that so Lewis Black could also defend Limbaugh. At least Black is explicit in his desire to be able to call people “retards,” instead of falsely, lamely claiming he’s just quoting someone else. Still, Palin ought to call for his firing, too.

Keith Olbermann, I had such high hopes for you on this one. Why did you have to pick this time to stay hinged? This was your moment, man! Last week, I thought you were overreaching when you teed Palin up, but then she caught up to you over the weekend. Why didn’t you close the deal? Last week, you were all like “Palin is done like a burnt brownie,” and now you’re like: Look! She’s using a lectern!”

Sure, he hit all the right points, but where’s the outrage? Jim Crow? Palin’s nonsensical, cowardly weaseling out of being a concerned special needs mom? “The war card?!?” Keith got more worked up than this when someone trashed his demo ratings.

But the worst offense has to be this bit with an inspired premise, but executed with the finesse of a drunken, incontinent caribou:

That had to be, without a doubt, the worst Topo Gigio impression I have ever seen. Here’s a hint: Don’t do a Topo Gigio bit if you have limited thumb mobility.

I suppose Palin and her spokesperson could divine something misogynistic about that bit, maybe the amount of lipstick, or all that unwanted hair, but I doubt it.

Since outrage is the currency of the realm in politics these days, if you’re not displaying it, or causing it, what good are you?