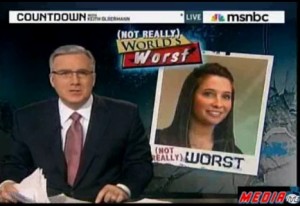 Two weeks ago called, Keith. They want their news back.

Viewers of Countdown might have thought they had tuned in to a rerun tonight, as host Keith Olbermann pegged his retrofitted “Worst Persons in the World (Not Really)” award to a two-week-old abstinence and safe sex PSA starring Bristol Palin and Jersey Shore’s “The Situation.”

Worse than that, though, Olbermann criticizes perhaps the only redeeming thing about the cringe-worthy spot, and makes a tone-deaf comparison to George W. Bush and 9/11.

Olbermann is seriously in need of some catchup. Not only is the PSA in question old-ish news, but after watching a clip from the spot, he exclaims “She’s the Candies spokesperson for abstinence?”

Actually, she has been for a year-and-a-half, now. Also, we have a black President.

Here’s the clip from tonight’s Countdown, from MSNBC:

And here’s the original PSA, in case you can’t remember back that far:

Now, there’s a lot wrong with this clip, from the awkward line readings to the cringe-inducing spectacle of “The Situation’s” singsong display of his “Mag-nums!” (a surer sign of overcompensation than a Humvee with a mirrored ceiling and a pair of “Truck Nutz”), but if there’s anything to applaud, it’s Palin’s embrace of safe sex alongside abstinence as a way to prevent unwanted pregnancy or disease. Amid all the natural revulsion at the two leads’ sand-and-water chemistry, this is a message that deserves some credit, a break from stereotypical social conservative orthodoxy.

Perhaps it is Olbermann’s intention to draw fire from Mama Grizzly Sarah Palin, and he probably will. Certainly, anti-Olbermann sites like Johnny Dollar are already working on their “Keith Olbermann Compares Bristol Palin’s Child to Terrorist Attack” headlines, but even a fair-minded person would find his quip jarring. Not only is it bad form for such a vocal critic of Palin to go after her child (a context that just made the bit seem mean-spirited), but using 9/11 as a punchline is a tiny needle to thread, and this misses by a lot.