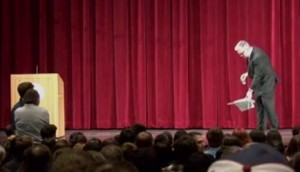 Former Countdown host Keith Olbermann followed his speech at Tuesday’s “An Evening with Keith Olbermann” with a 42-minute Q&A session at Cornelll University’s Bailey Hall. He began the segment with a bit of performance art, publicly desecrating a copy of the Ann Coulter-founded Cornell Review, literally mopping the floor with the paper. However, in a possible sign of peace in our time, he later shook hands with Ephram Smith, the Cornell Review writer whose article got the Swiffer™ treatment.

For the uninitiated, a prominent pillar in the ongoing will-they-or-won’t-they banter between Coulter and Olbermann is Coulter’s consistent mockery of Olbermann’s claim of Ivy League alma matership, by virtue of the fact that he went to Cornell Ag. Hell if I know the difference (I went to South Jersey’s UCLA), and while Olbermann insists that Ag is harder to get into, he also lets Coulter’s barbs get under his skin like subcutaneous fleas. The whole thing reminds me of nothing more than that scene in Goodfellas, where Billy Batts tells Joe Pesci‘s Tommy “Go get your f**kin’ shine box!”

It is within that context that the first questioner at “An Evening with Keith Olbermann” asked Olbermann to comment on an article in the Coulter-founded paper, and handed him a copy of it. According to Olbermann’s website, The Associated Press got the anecdote wrong, but luckily, we  have the video to tell the true tale. Olbermann pours some water out onto the stage, and proceeds to mop the floor with the paper.

Later in the evening, though, Olbermann is good-naturedly questioned by Ephram Smith, the conservative whose article (see page two) Olbermann was asked about, and the liberal firebreather shakes his hand, then performs repairs on the desecrated paper.

Smith’s article, by the way, is a somewhat scattershot harvest of low-hanging Olbermann fruit, but the kid shows off some decent writing chops. If Olbermann isn’t done staffing up, maybe he should give the guy a call. Peace in our time!