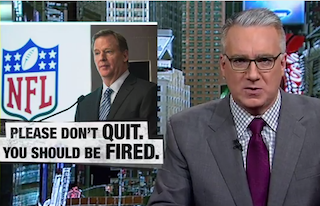 Last night, ESPN’s Keith Olbermann called on NFL Commissioner Roger Goodell to resign over the domestic abuse scandal surrounding Baltimore Ravens running back Ray Rice. In a new segment set to air tonight, Olbermann changed his mind: Goodell should not resign, the host argued — He should be fired.

It was a report from the Associated Press, claiming that law enforcement sent the video of Rice beating his then-fiancée unconscious in an elevator months before it was released by TMZ this week, that made Olbermann argue for the commissioner’s termination. Goodell had claimed that he had not seen the video until now.

“You have already forfeited your privilege of resigning,” Olbermann said to Goodell, saying that the only way for the NFL “to restore just the slightest credibility to the den of liars” that is the league would be for them to “fire you.”

Olbermann called out Goodell’s “naive, foulest, personally-hypocritcal comment” made in response to a question from CBS This Morning’s Norah O’Donnell about how TMZ was able to obtain the video when the NFL couldn’t.

“I don’t know how TMZ or any other website gets their information. We are particularly reliant on law enforcement,” Goodell said. “We don’t seek to get that information from sources that are not credible.”

“Where do you think reliable, credible law enforcement got its copy of the video, the one someone reportedly sent your office in April?” Olbermann asked in disbelief. “Netflix?”