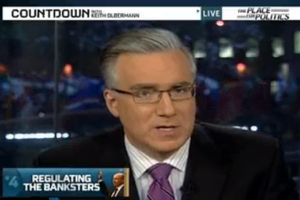 In a move that, as far as we know, is a cable news first, Keith Olbermann refused to bleep out Senator Carl Levin’s and Claire McCaskill’s references to what a Goldman Sachs executive called a “sh*tty deal” during today’s Senate hearings investigating whether the Wall Street giant was knowingly betting against their clients to make money.

It appears that Olbermann and his team felt that editing the hearing such that the offensive words were removed would weaken the compelling point that Goldman employees were betting against the market in a way that would profit the company while the rest of the American economy sank.

Olbermann did not make a big deal out of the fact that he refused to censor the senators, although it is, at the very least, extremely rare for a program running at 8pm– the peak of primetime and what is widely considered “family hour”– to willingly air crude language. Olbermann did warn his audience, twice, that “there is a commonplace but offensive word. It is being quoted from a Goldman Sachs internal email. It is repeated several times within this portion of the hearing. We are not bleeping it out.”

Watch the clip below, but be warned: it does included some crude language, and we didn’t bleep it out, either:


And, for contrast, here is CNN’s coverage of the hearings (via John King, USA), where the offensive words were modestly bleeped away:

Update: And here’s Hannity’s family-friendly take on the hearings: